© The Estate of the Artist, courtesy Michael Werner Gallery, New York and London

Image courtesy the artist and Pierogi

Courtesy of the artist and Two Palms, NY.

Man on Path Near Poitiers

Image courtesy the artist and Pierogi

Adolphe Appian
View of an Estuary near Martigues

A Contemporary Perspective: The Origins of the Modern Landscape 1820 – 2020
Curated by Jovana Stokic, PhD

Essay by Jovana Stokic available below.

The work of contemporary landscape artists can be seen through a new and inspired perspective when viewed in the context of their roots, often found in the art of the 19th century. This exhibition will pair works by Per Kirkeby, Cecily Brown, Patrick Jacobs, Shara Hughes, Tom Fairs, and David Scher, with that of reknowned masters Paul Cézanne, Eugène Delacroix, and J.B.C. Corot, to show tthat artists working today are going beyond simple representation of the landscape to portray individualized visions of Nature and man’s engagement with it. Comparison will reveal what today’s artists took from the masters and what they chose to leave behind.

For 19th century French painters, Nature’s unmediated presence was the main protagonist of their art, and the landscape outside Paris was the center of their world. With few barriers between themselves and their surroundings, artists would go into the landscape, work en pleine air and return to their studios to finish their work. Within the constraints of direct observation, Corot, Rousseau, Delacroix, and Cézanne merged naturalistic representation with their personal vision to create works that told the story of what they saw outside. Examples in this exhibition include three Cèzanne watercolors, one an 1878 view of Mont St. Victoire wiwth a bare tree in the foreground; a rare pure landscape painting by Delacroix of the town of Champrosay, and several works by Corot, including two sinuous line drawings done in the 1850s, and two late oil studies, one a night scene on panel and one an oil on paper.

Contemporary Artists
In contrast to landscape in the 19th century, in landscape art today, reality is often defined by the edges of the canvas, as though the process of observation has been turned inside out. Artist Cecily Brown, who has long been influenced by the art of the Old Masters and of the 19th century including Géricault and Delacroix, has said that when she starts a painting, she generally doesn't have an exact idea of what she is trying to achieve, and that she lets the final painting reveal itself as she works. The late Danish painter Per Kirkeby, represented here by a watercolor from 1981, has said, “My canvas is the plot of land and my colors—that is, the matter of paint itself—are the soil, the flower beds, with their different components and varying textures.” Shara Hughes, whose vibrant landscapes show the influence of David Hockney, has stated that she didn’t need the subject matter as much as she needed to make the painting. The late London born artist Tom Fairs sketched prolifically en pleine air: “My interest is primarily in things seen… where, in the light of the imagination, the commonplace may be transformed into the extraordinary. The ever-present transforming principle moves me.” Patrick Jacobs makes landscapes which are three dimensional objects viewed through a small circular viewing hole in a box, suggesting a Camera Obscura and creates a fabricated laboratory of nature, meticulous and other-worldy.

Gallery Description:
Jill Newhouse Gallery specializes in works on paper of all periods, with a focus on 19th and 20th century European artists. A Contemporary Perspective is the fourth in a series of exhibitions organized by the gallery pairing master artists with the art of today. Eugène Delacroix: The Enduring Power of Image (2019; essay by Jovana Stokic); Pierre Bonnard: Affinities (2018; essay by Karen Wilkin) and Under the Influence: Edouard Vuillard and Contemporary Art (2017; essay by Norman Kleeblatt) were also presented at the Art Show. 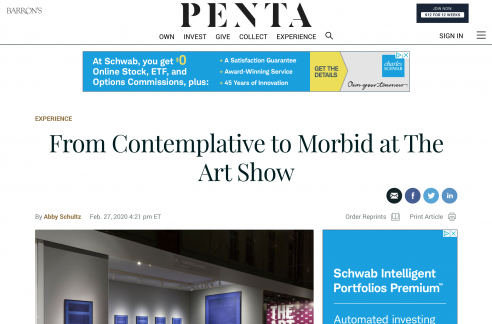 Barron's: From Contemplative to Morbid at The Art Show
February 27, 2020
View More
Back To Top